Tokyo in the Dark 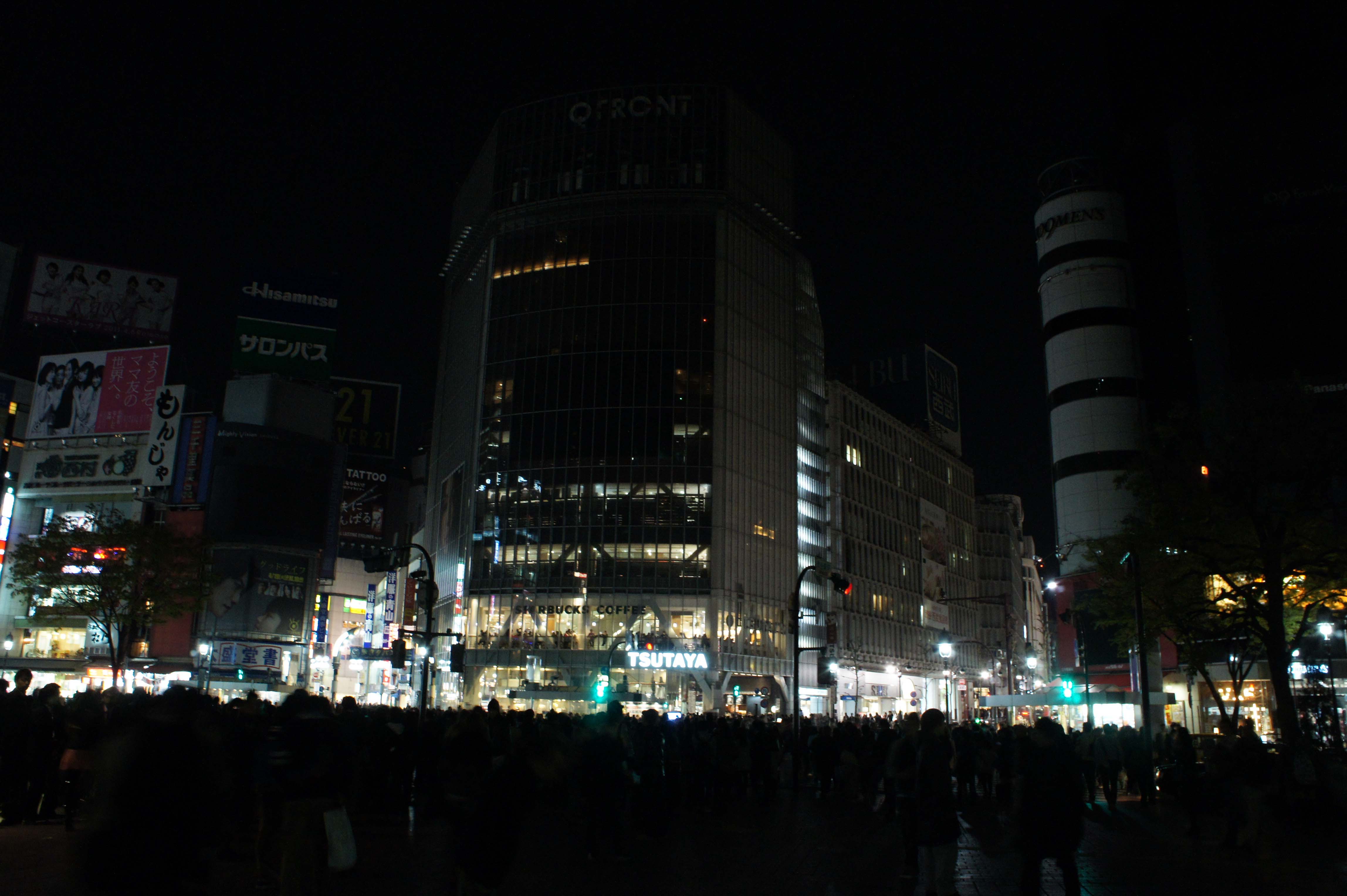 The iconic screens of the “Scramble Crossing” of Shibuya have been switched off due to the electricity saving.

I landed in my home city on the 5th of April, less than a month after the earthquake of 3.11. The main purpose of this short trip back was to conceive the current situation with my own eyes.

Three days after my landing, the evening of the 8th, a large aftershock shook us. A tremor with an intensity of 6 was recorded in the Tohoku region, to be specific near Miyagi, on the Japanese 7 stage seismic scale. Tokyo recorded 3 out of 7. (To compare the numbers it was 5+ in Tokyo on 3.11.) Although the shake itself wasn’t a terrifying experience for me, I immediately received some concerned messages from friends abroad. I turned on the CNN and BBC, they were reporting the earthquake in Japan as a breaking news. Reading some concerned messages from Japanese friends abroad, I imagined how I would have felt watching the news through the TV in the other side of the world. I was glad to be home.

Shortage of electricity, due to the suspension of the nuclear plants of Tohoku region, was becoming a less of an issue. This is partly due to the arrival of spring and less people were using air conditioning. The city was comparatively dark than before, especially the public spaces such as train stations. Trains were not running to the regular schedule but enough to keep one’s pace of daily life in the city. 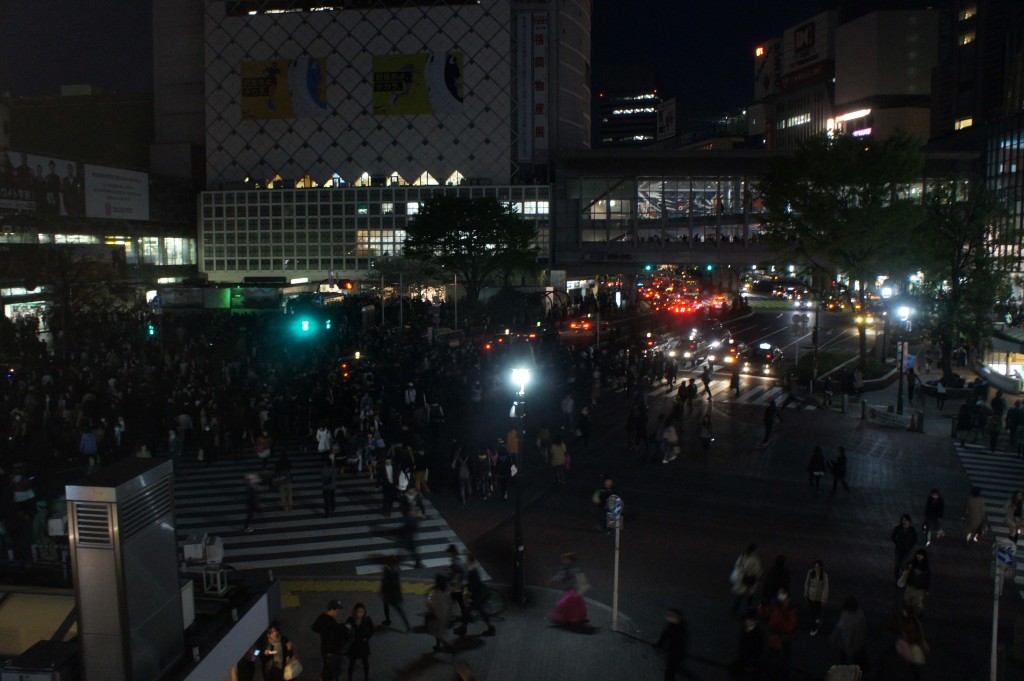 The lights that lit the billboards have been also turned off. Shibuya station is now much darker.

Apart from the apparent changes; the earth trembling every now and then and the public spaces being dark, the city seemed to have recovered its everyday life in a superficial level. The weekend I got back was the perfect timing for お花見 “ohanami” (cherry blossom appreciation party) and thus I headed to Ueno Park, one of the major sites for the cherry blossoms. Surprisingly enough, the park was completely packed with jolly ohanami visitors. Same as any spring, people were looking forward for this big seasonal event. 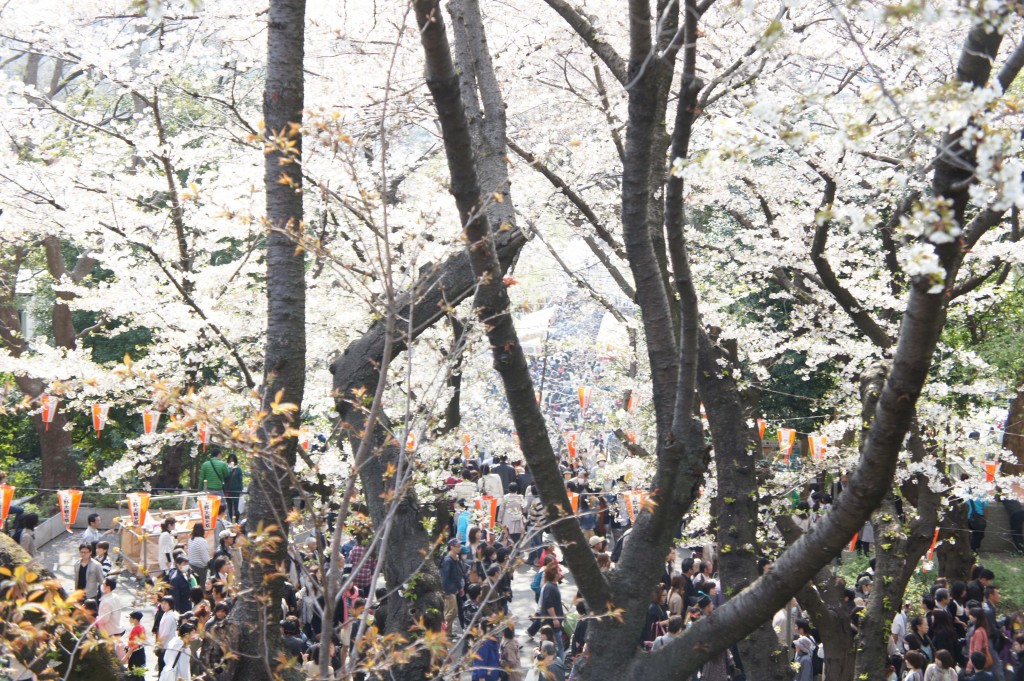 Ueno Park completely packed. You can see that even the tiniest dots in the center of the photo are people’s heads 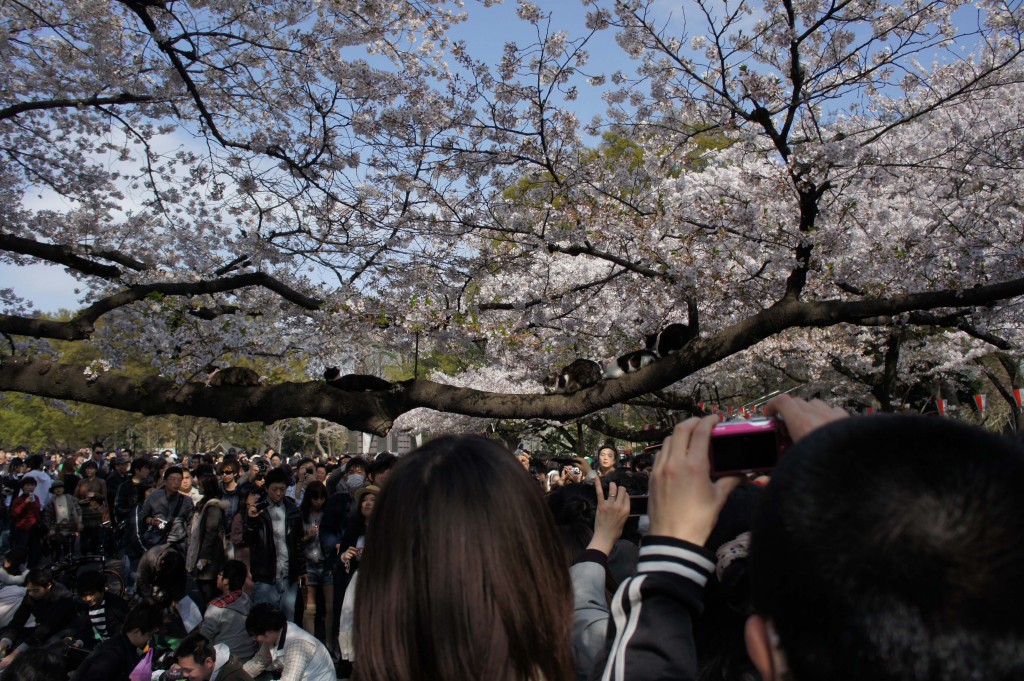 People taking photos of cherry blossoms and … cats on the branch 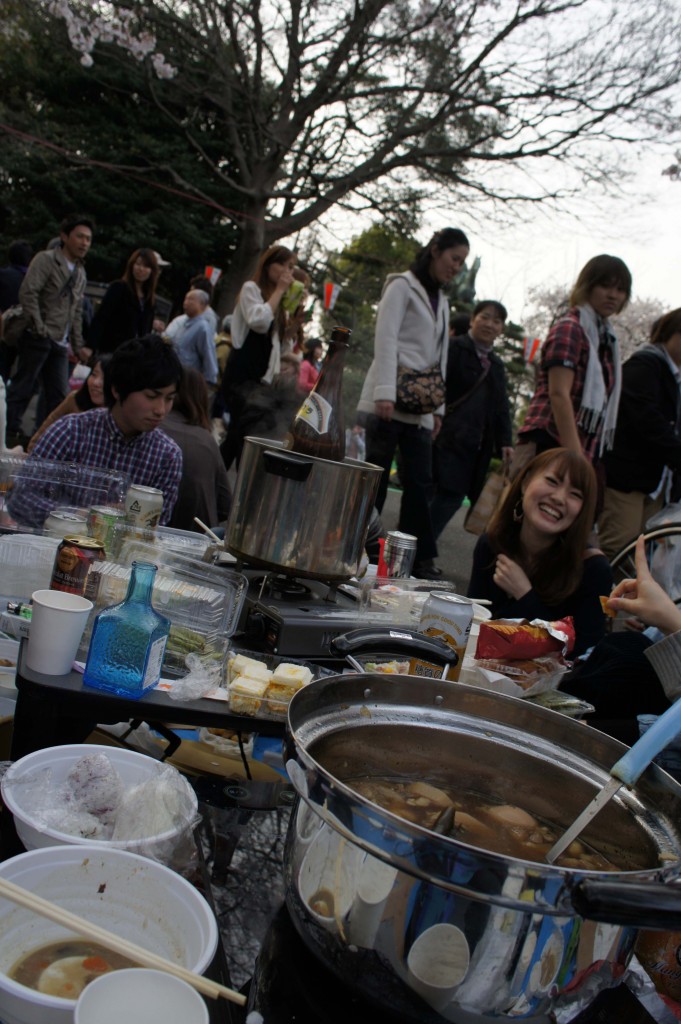 Some alcohol, hot pots and cherry blossoms, what else do we need for spring?

The word “自粛” – Jishuku- which translates as “self‐imposed control” was still haunting the general air and thus ohanami had to end before the evening : Partly because it is considered “immoral” to celebrate and to be drunk while there are many people suffering, and partly due to the electricity cuts that there are not enough electricity to light up the flowers at night. 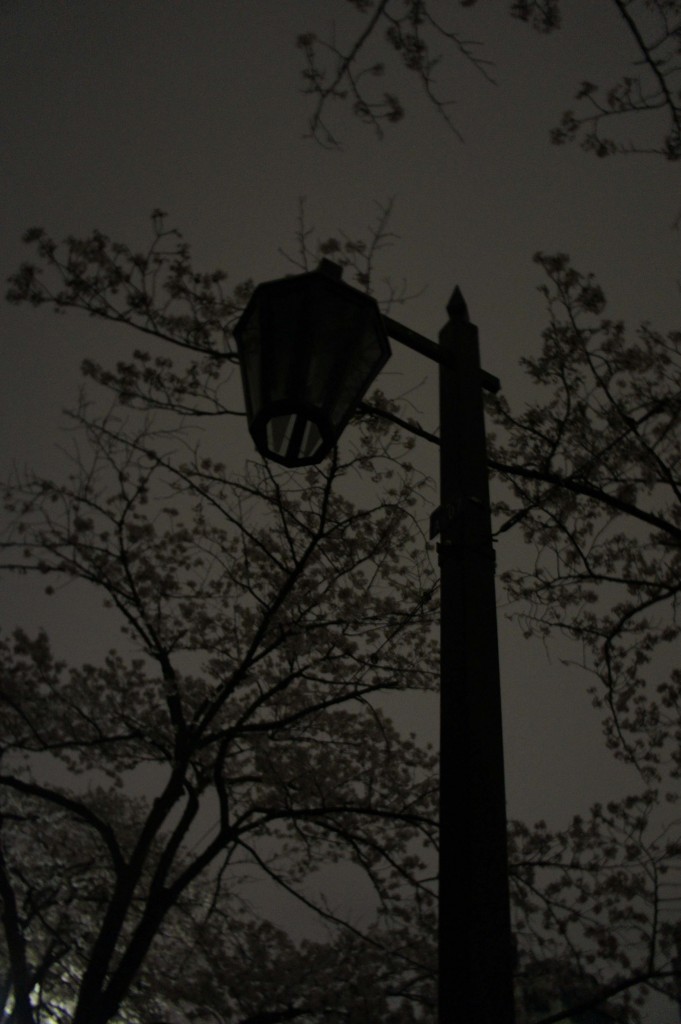 Whilst enjoying the cherry blossoms in the dark on my way back home, I started to think of the few positive things brought in by the 3.11 tragedy. One was possibly our realization of an alternative aesthetic: the aesthetics of darkness. Any major Asian metropolis today is over flooded with light: Dazzling neon signs and blinding lights of stores and street lamps tire our eyes. As Tanizaki depicted in his famous book In the Praise of Shadows, us Japanese had been well acquainted with the aesthetics of shadows and darkness. The busy lives in the 24 hours sleepless city have somehow almost made us forget the appreciation of such beauty. Post 3.11 Tokyo, slightly darker than before, has seemingly equipped a mature but fresh beauty to my eyes.