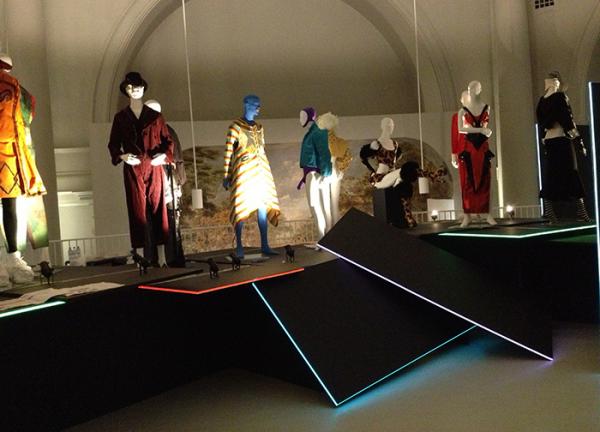 In the early ’80s, London fashion began to create a stir internationally. Fashion shows took place in New York and Japan. One breakthrough event, titled ‘London Goes to Tokyo’, included many of the designers featured here and in the upstairs gallery. The ’80s saw the explosion of the London club scene. Specialist club ‘nights’ offered opportunities for dressing up in the company of a like-minded crowd. Stevie Stewart of BodyMap explained that ‘each group of people, whether they were fashion designers, musicians or dancers, filmmakers, living together and going out together had a passion for creating something new that was almost infectious’.

At night, young designers’ imaginations were sparked by a vibrant London club scene. Early clubs such as Billy’s, Blitz and the Club for Heroes were small and attracted a selective crowd. John Galliano recalled, ‘Thursday and Friday at St Martin’s, the college was almost deserted. Everybody was at home working on their costumes for the weekend’. Designer Georgina Godley remembers, ‘Young London was all about taking risks and creating something out of nothing through passion and ambition’. This symbiotic relationship between music, club and catwalk remained the defining characteristic of 1980s style.

Discover the creative explosion of London fashion in the 1980s in a major exhibition at the V&A. Through more than 85 outfits, Club to Catwalk: London Fashion in the 1980s showcases the bold and exciting new looks by the most experimental young designers of the decade, including Betty Jackson, Katharine Hamnett, Wendy Dagworthy and John Galliano. Many — including Vivienne Westwood, Betty Jackson, Paul Smith, Pam Hogg and the political radical, Katherine Hamnett — are still stirring change. The exhibition explores how the creative relationship between catwalk and club wear helped reinvent fashion, as reflected in magazines such as i-D and Blitz and venues including Heaven and Taboo.

Designer and performance artist Leigh Bowery ran the notoriously camp nightclub Taboo, so called because ‘there is nothing you can’t do there’. He developed his extreme personal style by manipulating and adorning his own body, and using the club as a theatre for his exhibitionism.
The high camp club scene inspired and provoked clubbers, performers and designers to push their fashion, and their behavior, to the extreme. John Galliano recalled, ‘I was a club demon… in the mid-eighties, there was only one place to be. Taboo was the best’.

Creating an aesthetic that captures the spirit of an 80s London club has been no small challenge for our V&A designers, especially as the mezzanine is such a light, open space. They have, however, done an incredible job by building raised black plinths which they have edged with fluorescent electromagnetic tape to give the gallery an edgy, clubby feel. 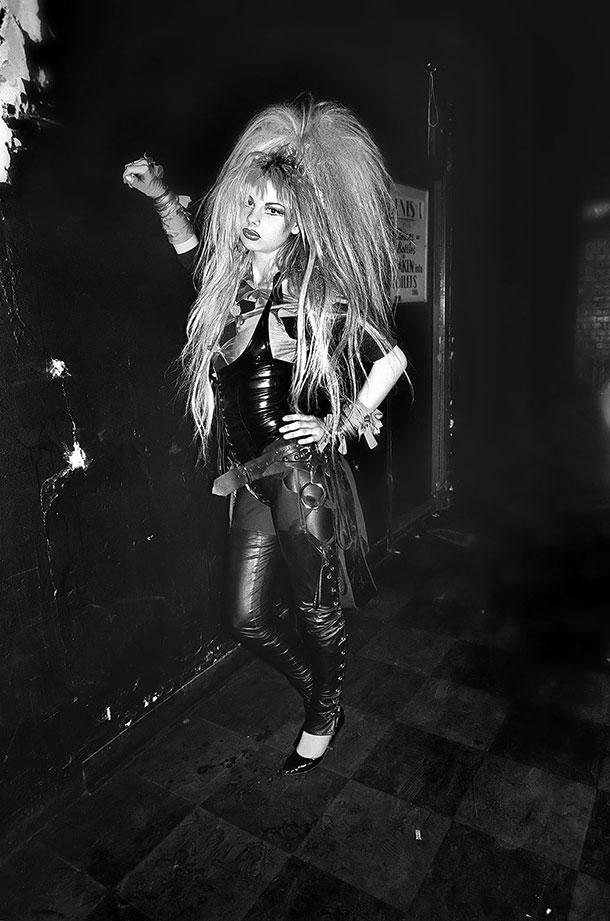 Malcolm McLaren and Vivienne Westwoods shop SEX introduced fetish and bondage wear to the club and music scene in the mid 1970s. These became an integral element of punk, the anarchic godparent to 1980s style.

Fetish re-emerged in a more glamorous form in the 1980s. The first of a new wave of clubs, Skin Two, opened in 1983. Brave clubbers wore full rubber outfits and fetish gear, making use of stretch synthetics, leather, rubber, buckles and straps, worn with stilettos or thigh-high boots. The look was enriched with Glam rock elements such as luxurious gold leather and flashy jewellery.